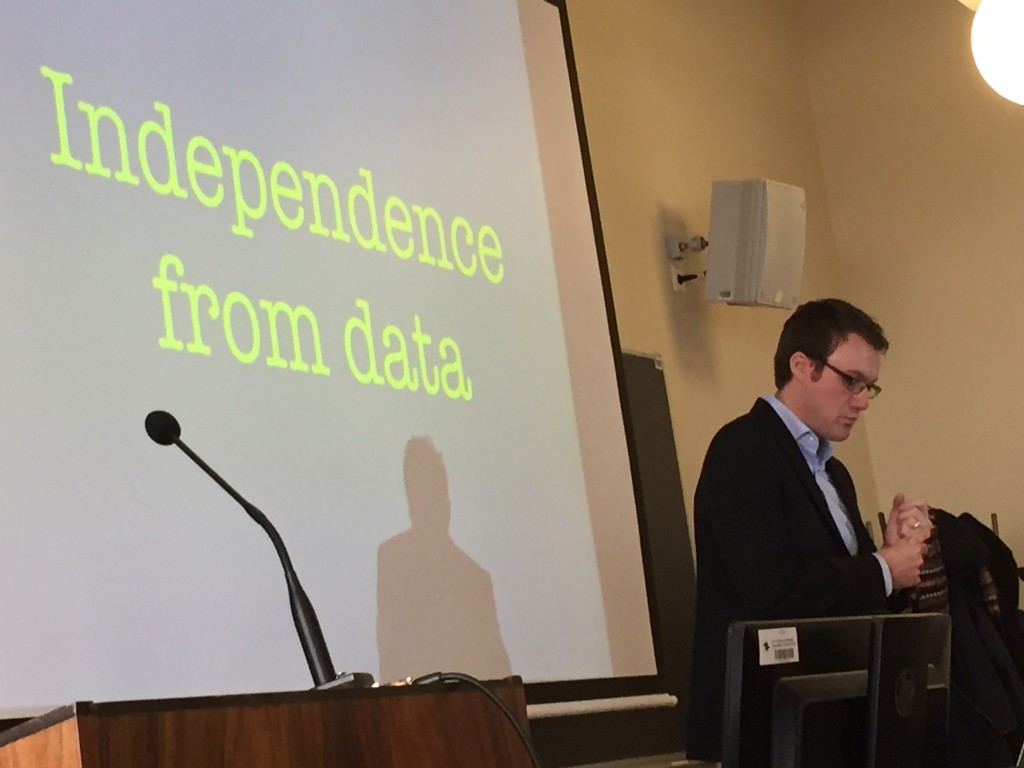 The Nordic Data Journalism conference (NODA16) ended with a well-attended presentation on the so-called Panama Papers project, on Saturday (23.4.). In addition to its professional focus, the event featured an academic pre-conference on Thursday (21.4.). The full academic sessions are available as videos, but here are some of our favourite takeaways.

Paul Bradshaw, of Birmingham City University, delivered the event’s first keynote over the state of data journalism and the research of it. Bradshaw imagined two divergent futures for data journalism, the “Shangri-La” and the “data dystopia”. Data illiteracy and complancency towards opening up new data is a path to the latter, he warned.

Julian Ausserhofer, of both University of California and University of Vienna, presented findings from a systematic literature review of data journalism scholarship. According to Ausserhofer, data journalism research really did not emerge until 2010, and it expanded rapidly from 2013 onward. A common problem within the scholarship is the neglect of both methodological and theoretical aspects, the study found. 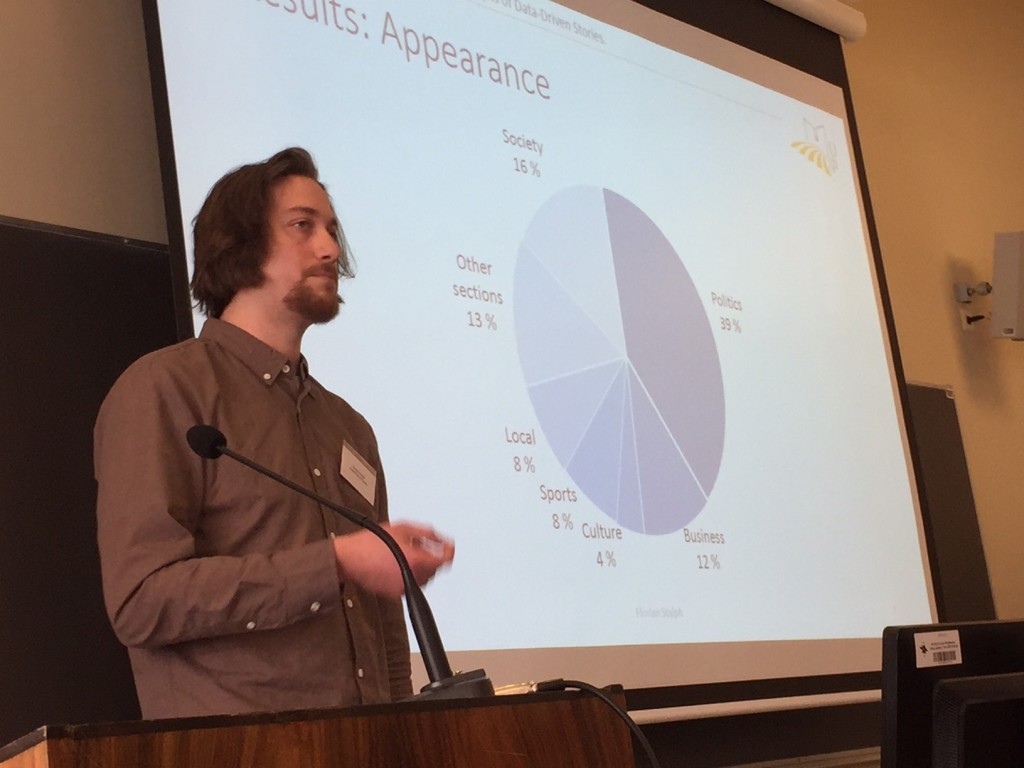 Florian Stalph, of University of Passau, presented the results from a content analysis of data journalism stories in four European news publications. According to it, a large segment of data journalism stories (49 per cent) are non-interactive, and they most commonly rely on goverment sources (23 per cent). Of the 244 stories investigated, only two were what is called investigative journalism, Stalph remarked.

In addition to his keynote, Paul Bradshaw also presented the findings from a series of interviews with British, local journalists. Most of the interviewees were neglecting their data security, the study found. For example, more than one-fifth (22 per cent) used the same password for different services, and 88 per cent did not know what information security measures their employer had taken. Many of the journalists simply did not think caring for information security was their responsibility, Bradshaw found.

Esa Sirkkunen, of University of Tampere, presented his review of the state of data journalism training in Finland, which he found lacking. Initially there was much interest and activity in developing data journalism training, but since the heyday the field has “stagnated”, Sirkkunen found. The courses available are too short, and focused on the television and print media.

Ester Appelgren, of University of Stockholm, reviewed the interactive features on 31 data journalism pieces, that were submitted for the Nordic Data Journalism awards. Only three of the stories left the readers in control of the presentation, while journalists controlled the consumption of 13 stories. Most stories (15 pieces), however, allowed some level of control to both the audience and the producers. 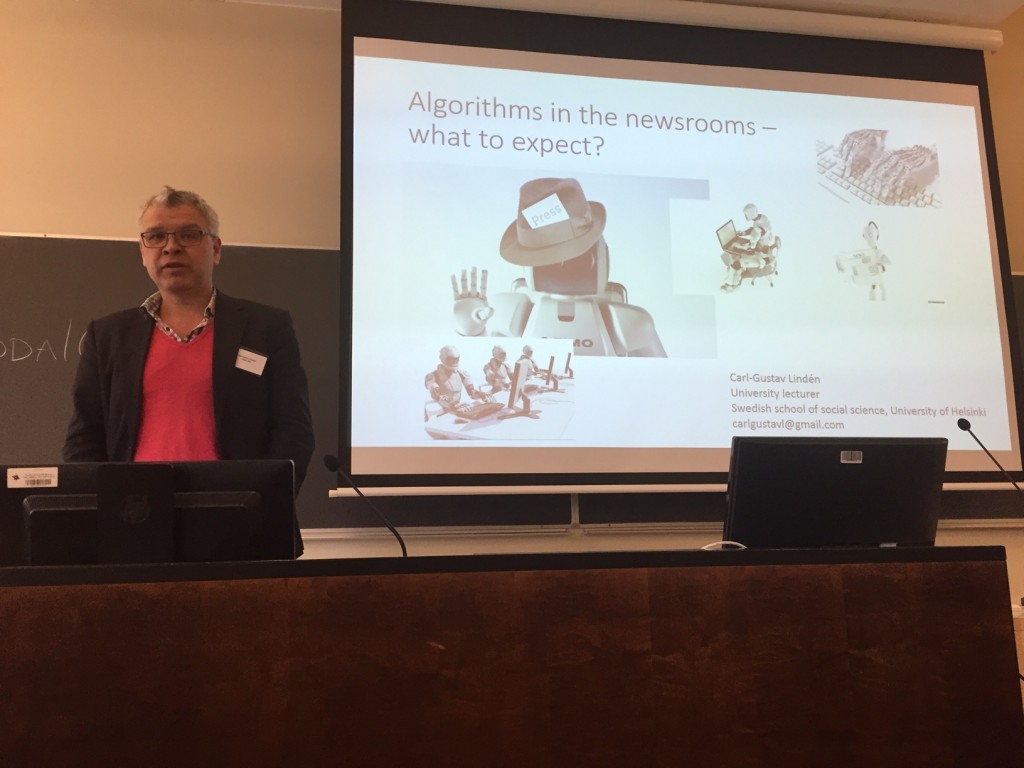 Carl-Gustav Lindén, of University of Helsinki, presented the results from a series of interviews with various experts and journalists regarding the future of so-called “robot journalism”. According to Lindén, journalistic work is not seen very susceptible to automation: automated journalism may replace some of the functions of wire services, but replacing in-house journalists with automation is not a priority for publishers.

Nicholas Diakopoulos, of University of Maryland, delivered the event’s second keynote on the societal impact of algorithms. Different configurations of search engine and social media algorithms may, for example, sway election results. In an experiment the audience had the chance to play around with an interactive journalism feature, the underlying algorithm of which was open and changeable by the users. According to early results, the users that tinkered with the algorithm also found the piece to be more objective and trustworthy, Diakopoulos told.

Some of the papers presented at the NODA16 academic preconference will be selected for publishing in The Journal of Media Innovations.

Videos of all academic presentations are available on our earlier piece on the NODA16 conference.

Edited on 25.4.2016: A previous version of this article falsely claimed that Paul Bradshaw is still affiliated with City University of London.