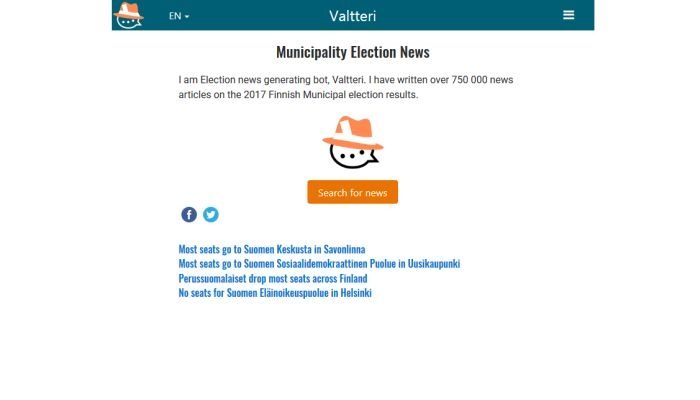 Leo Leppänen, Myriam Munezero, Stefanie Sirén-Heikel, Mark Granroth-Wilding and Hannu Toivonen, all of the University of Helsinki, studied whether the journalistic process of newsworthiness determination can be automated. The researchers used statistical analysis to determine newsworthy events.

The paper looked at a real natural language news generation system “election bot” Vaalibotti Valtteri as a case study. Their study concerned structured data from the Finnish Municipal elections that took place in April 2017. The election results were publicly released immediately after the completion of the first count by the the Finnish Ministry of Justice.

The study also examined the value of automatically created news articles. The Vaalibotti Valtteri system created over 700 000 news articles in three different languages, and audience could narrow down the news based on their location and interests.

The ability to generate large amounts of tailored content, and the ability of the reader to interact and tailor the content, are the main benefits of this kind of automation, the researchers write. The algorithmic detection of newsworthy content from structured data is feasible and can support journalists and media companies in producing a large quantity of news articles serving a wide audience at varying local levels and multiple languages, they conclude.

The conference proceeding “Finding and expressing news from structured data” was presented at AcademicMindtrek ’17, Proceedings of the 21st International Academic Mindtrek Conference and is available online as an open-access publication.

Picture: Screenshot of Vaalibotti Valtteri website, made by the Immersive Automation research project at the University of Helsinki