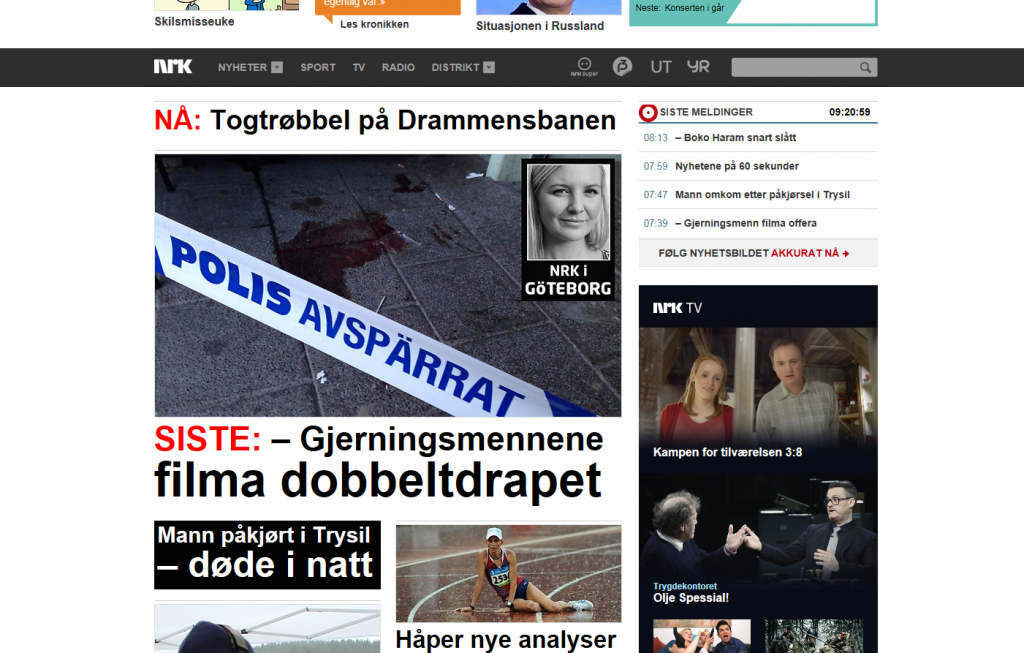 The Norwegian public service broadcaster NRK has “settled in” to the online environment, write Helle Sjøvaag, Eirik Stavelin and Hallvard Moe, all of University of Bergen. The authors compared NRK’s online output from 2009 and 2013 to see what, if any, changes in content and service had been made.

The data collection yielded a total of 139 328 news stories, most of which were automatically coded. Stories from 10 days in 2009, and 12 in 2013 – a total 5573 items – were coded by hand. The combined method yielded accurate results, which reveal only moderate changes in NRK’s operation.

The total amount of stories published in a year decline from roughly 75 000 to 65 000. This, however, did little to change the front page’s topical distribution of stories, which remained near identical. The only significant changes on the front page were the steep decline of crime news, and the emergence of (previously nonexistent) science and techonology news. The page itself, however, became more dynamic, stories changing order more often.

Proportions of all stories changed slightly more. Especially dramatic was the drop in cultural news, which plummeted to less than half of their 2009 share. Accident news, instead, saw a major rise over the four years. In terms of multimedia features comment fields were halved in numbers, while the use of videos was over doubled.

All things considered, NRK has been keeping up with the times, the authors conclude. It has directed commenting to social media, and made use of improved techonology to incorporate a wider variety of service. Still, NRK has maintained much of its time-tested news values, mostly focusing on consolidating its standing rather than pursuing new conquests.

The results of the study were published in an online-first article of the journal Journalism Studies. It can be accessed here (abstract public).