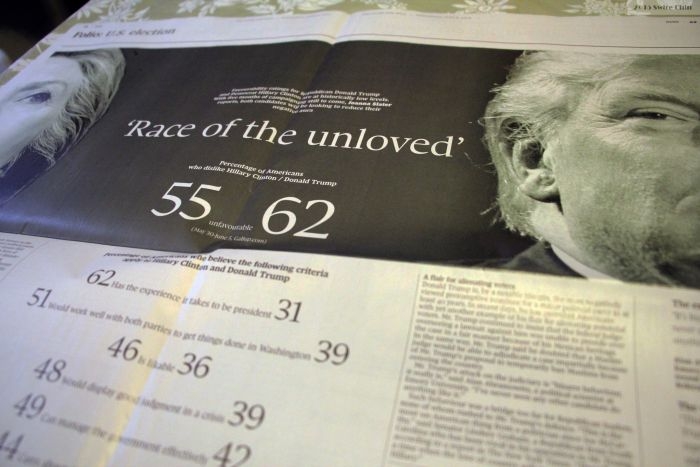 The news coverage of the US 2016 presidential campaign was mostly negative throughout, regardless of which candidate the news was about, Thomas E. Patterson of the Harvard Kennedy School writes. Patterson’s report is a part of a larger series of studies on the election, and it is based on the content analysis of five US newspapers and five television networks.

Overall, both candidates Hillary Clinton and the now-president elect Donald Trump received equally high shares of negativity. News concerning each candidate was 87 per cent negative and only 13 per cent positive. In absolute numbers Trump drew more flak, as he received overall more coverage (from 51 to 56 per cent of all news pieces).

The tone of Trump’s news coverage fluctuated between 65 and 94 per cent negativity, thus remaining always in the red. Of the investigated outlets, the television network CBS was Trump’s harshest critic, with 89 per cent negative coverage. FOX network was most lenient toward Trump, still publishing 73 per cent negative news on him.

The reason why Clinton seems to have enjoyed more positive coverage is because most news outlets predicted her win. When only news pieces that describe the candidates’ characteristics are considered, both candidates were represented equally negatively by the press, the author explains.

The negativity of the 2016 campaign coverage is not unique, Patterson points out. News in general have been turning increasingly negative for decades, and the toxicity of the 2016 election was not unprecedented: the campaign between Al Gore and George W. Bush in 2000 was even more uniformly negative (at 75 per cent negative news) than the one between Trump and Clinton (71 per cent).

The report “News Coverage of the 2016 General Election” was published by the Harvard Kennedy School. It is freely available online.