ECC ECREA 2014 features many journalism studies sessions this year. One of these session, held today 14.30 – 16.00 at local time, focused on Journalism and Social Media. 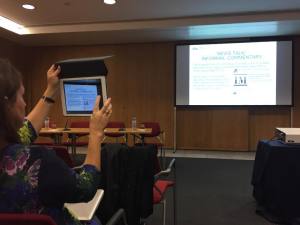 Henrik Bodker spoke about Social Media as Hybrid Filters of Journalism. He brought up different commentary strategies: the simplest of them being a simple link to a news story (which is also an implicit way of saying “this is worth paying attention to”).

Eli Skogerbø has examined networks of power. Her research focuses on connections between journalists and politicians on Twitter. Her findings point out that the these kinds of tweets are mainly mentions and rarely actual conversations. Politicians are mostly made aware of issues or challenges by using Twitters “@-mention”.

Radim Hladik and Vaclac Stetka from Charles University had studied the role of social media in setting the news agenda in the Czech Republic.

They noted that Twitter can be seen as a “beat” to cover. However, one has to take consideration of several things when reporting from Twitter. For example, tweets offer sources better control, as 90 % then are full quotes.

Tabloids use Twitter as a source of “soft news” (74%), quality press for both soft news (43%) and hard news (39%). There is a distinct difference between countries as it comes to sources. Dutch newspapers featured 20 % of politicians as sources of the Tweet (12% celebrities), whereas British papers prefered celebrities (36%, politicians 6%).

In their research, Hladik and Stetka studied how the mainstream news used social networking sites (SNS) as news sources.

Marcel Broersma continued with his research on Twitter. This study delved into the tabloid journalism and celebrities’ self-representation on Twitter.

Broersma sees celebrity tweets as self-presentation and impression management. They are snapshots of the private lives of celebrities – but controlled ones. Celebrities tweet to manage their public persona without the need to engage to interviews and/or photoshoots with tabloid press.

Broersma’s research focused on popular tabloid papers in the UK (Daily Mirror, the Sun) and in Netherlands (Telegraaf, AD) from 2008 to 2012 for 4 months a year. He used content analysis on articles that used and included celebrity tweets as sources.

He found out that tabloids used tweets to peek into celebrities private (but controlled) lives. This happened more in the UK than in Netherlands.

Scott Eldridge was last on this journalism session. He also talked about Twitter, this time in context of rumours.