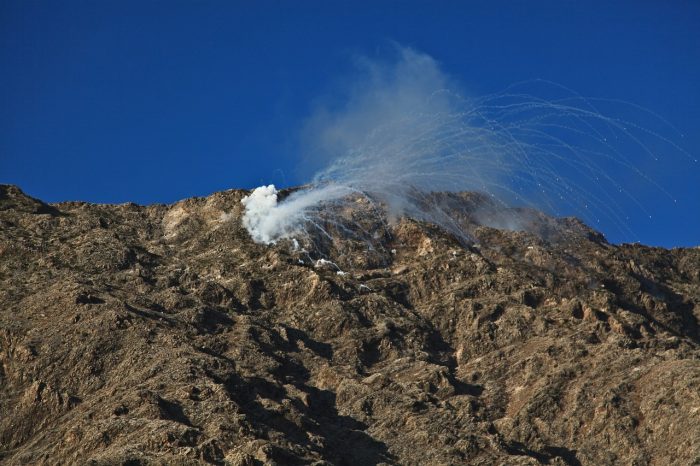 The representation of the PISQ military testing site in Sardinia, Italy, changed significantly over the years, Aide Esu and Simone Maddanu, both of University of Cagliari, write. The authors analysed 1 600 news articles about the site, published by the local newspaper L’Unione Sarda between 1956 and 2013.

Esu and Maddanu identified four distinct phases in the coverage of the site. In the beginning, before and immediately after the PISQ site’s founding, the coverage was positive: the expansive military installation was welcomed as the herald of modernity – a long-awaited intervention by the Italian state.

Beginning in the late 1960’s, general anti-war sentiment affected the coverage. During this time, articles also dealt with the increasing tensions between the military and local populace, who now begun resisting the overtake of their land for munitions testing. This period lasted from 1969 to 1980.

The third period, from 1981 to 2000, was defined by increasing risk-awareness. Locals begun seeing stray missiles and aircraft as a legitimate threat, while the military’s presence was still recognized as economically important. This growing sense of danger led up to the latest phase of coverage, which revolved around the particular threat of irradiation.

In early 2000’s the news begun pointing at the similarities between the ailments occurring around the PISQ site and the so-called “Balkan syndrome” and “Gulf War syndrome”. Projectiles composed of depleted uranium were used in wars in both the Balkans and the Persian Gulf, which later manifested in various radiation-related sicknesses. When similar symptoms and deaths -and the use of radioactive munitions- came to light in Sardinia, an uproar ensued.

The article “Military pollution in no war zone” was published by the journal Journalism. It is available online (abstract free).